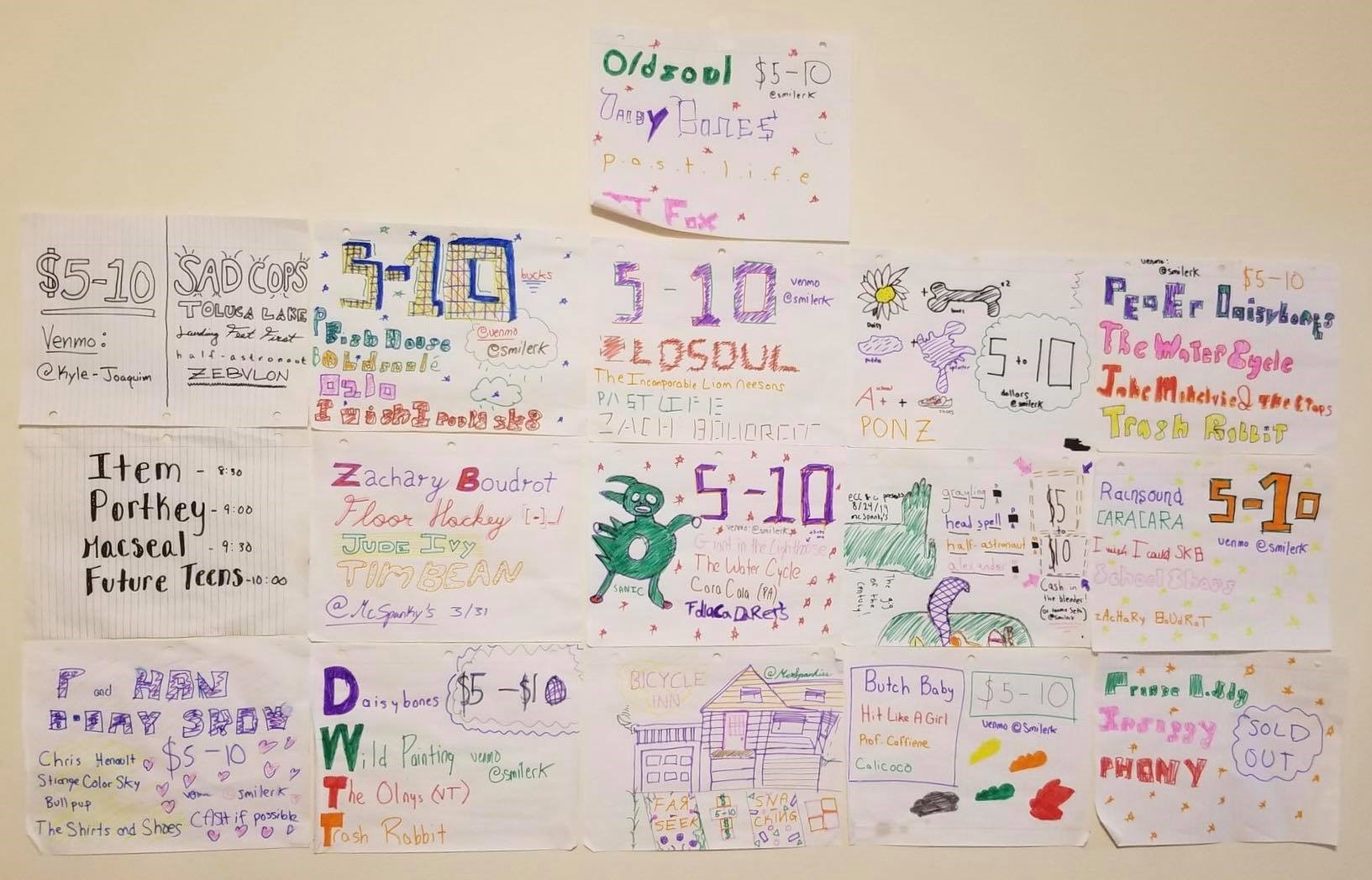 In a city full to the brim with live music and a hopping underground scene, many DIY venues have popped up in the wake of demand. However, one stood out from the rest – McSpanky’s, a basement venue that started off as an offhand joke blossomed into something more than people – even the owners – expected.

McSpanky’s was widely known to be run by Seth Kaplan. Kaplan is a Computer Science major at UMass Lowell who had always been around the DIY scene. He toured with Mallcops, played in DIY bands, and attended a large array of DIY shows over the years – it was only a matter of time before Kaplan created his own underground venue.

As Kaplan tells, in the fall of 2018, he was conversing with a friend, Owen, who had ties to New York based indie rock band Macseal. Macseal was releasing their Map It Out EP and were looking for a venue in Boston to no avail. Kaplan jokingly offered up his basement and Macseal accepted. With Macseal officially on the bill, they brought in local Boston “bummer pop” collective Future Teens. Kaplan then brought on Portkey – his own ensemble – and another local band, Item.

In the weeks approaching the show, Kaplan recalls, “We were kinda like … ‘can we do this?’ I guess so.’ and we brainstormed names.” On the chopping block were Schrute Farms, Sky High, and a fourth one Kaplan didn’t remember. “I really didn’t want to have an [The] Office reference,” states Kaplan. They had a name, they booked a show, and McSpanky’s was born.

After a taste of success following the first show, Kaplan continued to book shows highlighting local acts but mostly centering around touring bands. He did this in an attempt to support them and draw them a following in the Lowell area, one that they may not have been exposed to before.

As more shows came and went, more people learned about Spanky’s and the more it gained a reputation as a reputable DIY venue that ran a successful door. Every show, showgoers would first be met with Kaplan smiling and greeting everyone that walked through while simultaneously collecting funds for door. A standard $5 was assessed and it didn’t matter if it were cash or venmo – they accepted both. While it was a standard $5 entry fee, Kaplan encouraged people to donate more while also not turning people away if they didn’t have the full $5.

“I’m not going to turn anybody away, but if you have money, you should pay!” states Kaplan who tried hard to foster a safe and comfortable environment for showgoers but also the bands on the bill. “I never took a cut and I wanted people to know that, I’d rather have a band of five people eat at Taco Bell rather than put it in my pocket.” Yes, you read that right. Kaplan, nor McSpanky’s in general, made profit off of their door charges.

McSpanky’s diligent doors and fun environment eventually caught the eye of local record label Counter Intuitive Records who approached McSpanky’s for a show. “Jake [of Counter Intuitive Records] asked me to book Insignificant Other and then I got Phony,” states Kaplan but that wasn’t where the show was destined to end. “I [asked] ‘haha what if Prince Daddy [and the Hyenas] did a surprise set lmao’ and eventually [Jake] said yes.”

Originally, the show was promoted with a “surprise headliner” with the intent to announce Prince Daddy the day of the show. This was in hopes that they could limit the draw of showgoers that Prince Daddy was expected to pull. However, as fate would have it, the “surprise headliner” was leaked which forced Counter Intuitive and Kaplan into selling tickets. The show was capped at a hundred people and sold out quickly. “If there could’ve been five hundred people in my basement, there would have been,” exclaimed Kaplan.

However, despite this growing success and opportunity for the local DIY venue, disaster struck causing McSpanky’s to close its doors to the public. The final show for McSpanky’s was on December 28, 2019 which showcased popular local acts oldsoul and Daisybones accompanying Past life and Pet Fox. The morning after this show, McSpanky’s was broken into and in fear of his safety, his roommate’s safety, and his cat Lilly’s safety, Kaplan made the decision to cancel any shows booked and close their doors.

Despite the break in and worry from Kaplan, he planned a last hurrah to send Spanky’s out with a bang. Unfortunately, due to the then rising COVID-19 exposure, cases, and the entire booking and venue industry coming to a screeching halt, the final show was cancelled due to public health concerns.

An abrupt ending to Spanky’s brought sadness to frequent showgoers and Lowell lost yet another venue in the DIY scene. However, its memory will live on. Kaplan made sure of that and memorialized one of his favorite memories in the form of a t-shirt. The t-shirt showcased resident kitty Lilly sitting upon the cabinetry with a crowd of people onlooking and the hands of praise from singer and guitar player of Daisybones, Dylan. “I loved it. It made Lilly look like a god.” The shirts were designed by recent graphic design graduate, Molly Whitmore and sold for $10.

Kaplan didn’t expect the t-shirts to take off the way they did. With laughter, Kaplan explained, “I screwed myself so hard with that.” Though that didn’t matter because later he stated, “I just wanted something physical to remember it by,” and so did seventy other people.

Spanky’s grew from a small joke comment to a friend into a well-oiled, welcoming hangout space and venue. It became a beloved safe space within the DIY scene. And to Kaplan? “It reaffirmed my belief that DIY could be good and a positive place … all it takes is one person to give a sh*t and actually try,” remarks Kaplan. “I hope people remember this kind of place can happen again if we just try and this is what DIY and local music is kinda all about. Never lose sight of that. Having fun with your friends and just listening to rock and roll.”