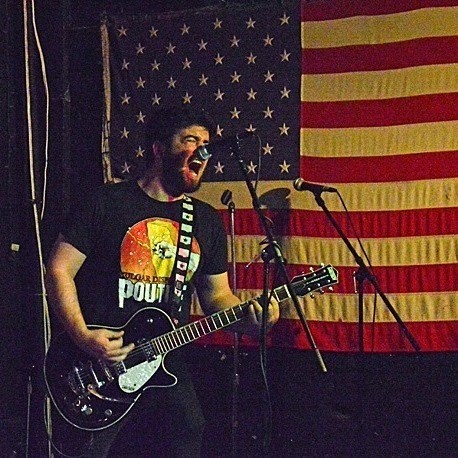 5 Questions For: Chris Jackson of KCUF

KCUF is more than just an explicit surprise when you look at it in a mirror, it’s also the name of a melodic punk group that regularly splits its time between Lowell and Boston. The power trio possesses an impressive knack for weaving their snotty sound (Which occasionally toys in the realm of outlaw country) with remarkable wit and clever storytelling, into multiple singles, EPs, and a full-length’s worth of songs about suburban boredom, slow degradation, and existential cynicism. (In one instance the only lyrics to a song is “Everything Is Garbage”)

Leading this pack in this bewildered and bleary-eyed take on working class punk is guitarist/vocalist Chris Jackson, for whom we have a special surprise…

(I guess it’s not that big a surprise though…)

That’s a tough one. I’ve been listening to a lot of individual songs as part of a resolution to try and listen to my whole Discover Weekly playlist every week. The new Spanish Love Songs record, Brave Faces Everyone, is really good. I had a hard time with it at first because it felt almost too relatable, y’know? It freaked me out a little. Rhombithian is another great one I listened to recently, Sincere Engineer is just awesome.

I would do almost anything to open for Against Me! one day. I just finished reading Laura Jane Grace’s biography, she’s had such a big impact on my musical tastes and worldview that it’d be the peak of my life to share the stage with her.

I play fantasy football, which sounds basic af, but I won a bunch of money on it this year and it fully funded the recording for our upcoming EP, so take that, jocks. Besides that, arguing with friends over which member of the Bon Appetit Test Kitchen we are.

The one thing I want to see is some sort of regular, recurring show/venue/event that like EVERYONE shows up to. I just think it’s important that everyone has everyone else’s backs, cuz who else is going to, y’know? I think it’d be awesome if I knew that every, I don’t know, Sunday afternoon or something like that, I could show up to a spot and see 3 local acts that I know are gonna be there next week when I play the same spot.

5. If you could give a eulogy to your favorite artist, who would they be & what would you say to them?
(This question comes from the previous 5 Questions interviewee Alyssa Vautier)

Do they have to be dead? I guess that’s the point of a eulogy. I’d probably go with Erik Petersen from Mischief Brew. I’d just thank him for the music he made, the community he created, and how much I regret not finding him sooner

KCUF’s music is currently available to stream and download via their BandCamp page.