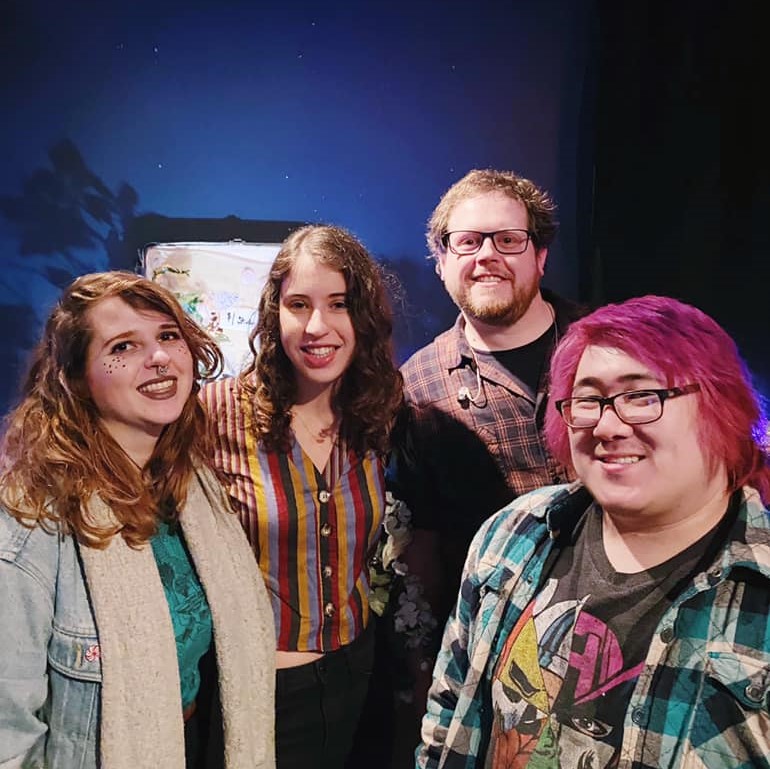 Tips From the Road with Tysk Tysk Task

Neil Peart, the late drummer of Canadian rock band Rush once said that “the real test of a musician is live performance,” referring to the wild ups and downs of touring. This, however, is a test that many global and local acts do not fear as they take their music on the road to share with the world. Tysk Tysk Task is no exception.

Tysk Tysk Task is a Lowell-based indie rock band formed in August of 2018 by co-songwriters Samantha Hartsel and Kyle Cuneo in a Dorchester apartment and now consists of Hartsel on vocals and guitar, Jina Moran on drums, Ben Kotce on harmonica and Mike Hayden on bass with Cuneo as a still active co-songwriter. The band has had experience opening for Dyr Faser, Tera Melos, and Mouse on the Keys, the Boston Hassle referring to their style as “stripped down rock n’ roll” and a  “raw and female-fronted version of Nirvana Unplugged.” Hartsel describes their sound as “garage grunge” and cites PJ Harvey, The White Stripes and Yeah Yeah Yeahs as their influences. As for the themes of their songs, Hartsel seeks to invoke political topics such as “smashing the patriarchy, resisting Trump and supporting the rights of women and LGBTQ+ folks, with edge and fury that encapsulates the palpable anger of the times.”

As a local DIY band, Tysk Tysk Task serves as their own manager. Knowing that they wanted to stay local due to important personal commitments, the band decided to team up with another indie rock group: TIFFY from the Seacoast of New Hampshire for their January 2019 tour for which planning began in early October. The tour spanned four nights with shows at News Cafe in Rhode Island with Late Night Trip, 3S Artspace in New Hampshire with Five Feet, Sun Tiki Studios in Maine with Peachier, and O’Brien’s Pub in Allston, Massachusetts with Lobby Boy and Scorpio, the most highly attended show of the tour.

Moran cited her favorite aspect of touring as “getting to meet new people and explore new locations,” a sentiment which Hartsel backs up, citing the impact the crowds and “outside of Boston vibes” had on her. “These communities have a less saturated scene than in Boston so we felt like royalty,” Hartsel said. “In Boston, clubs offer us a dollar off beer or half of appetizers, which we greatly appreciate, in addition to a cut of the door. But these venues really made us feel welcome, setting us up in a green room with free beer, hot tea and kettles, cushy couches – it made tired musicians like us feel at home!” Moran noted the importance of these new and unfamiliar and ever-changing settings. “Different crowds and venues will react totally differently,” Moran said. “But that can be good too because you are experiencing different types of venues and different types of people.”

In this sea of new faces, Tysk Tysk Task found a friend in their Portland opener Peachier while touring, a local act that was happy to work together with a non-local band. “We brought variety to the scene,” Hartsel said “which brought more people to the club and we all went home with more money from tickets.” Another friendship blossomed with their touring partner TIFFY after a decision was made to get adjoining suites for a night in Portland. “Now we feel like we have friends for life,” Hartsel said of the bonding experience, “to collaborate and navigate the Greater Boston music scene for years to come.”

While their time on the road had revealed great friendships and experiences to them, Tysk Tysk Task was met with that “real test” that Neil Peart described. Moran described the touring experience as “draining physically” at times, but found that the rewards of touring outweighed these feelings. “While it was tiring, I think overall, the whole thing had us pretty hyped up and excited,” Moran said. Hartsel also felt ths stress of the tour. “I’m someone who always gets nervous 24 hours before a show, no matter how prepped I feel, because that’s just me. I put my heart into every live show, bare it all. I was joking with the crew that a tour is like a consistent anxiety attack back to back to back because it’s just one big day after another,” Hartsel said. Nonetheless, she found the feeling rather inspiring. “The adrenaline is intoxicating and I can’t wait for the next one,” Hartsel said, and noted that at the end of the tour, despite the anxiety she had faced, she was met with a bout of “post-show blues.”

For those looking to tour, Hartsel suggests reaching out to local bands with similar sounds and ideals, and explained the formation of a “community audience.” Hartsel was drawn to working with other female artists. “It really was amazing to play a bill with such amazing women,” she said. Hartsel’s next piece of advice focuses on learning songs that will be familiar to audiences, an idea she originally resisted. “Find a great cover song everyone knows to draw in a crowd that doesn’t know you,” Hartsel said. “It was Jina’s idea to play a very popular rock song and I was sort of against it— She was totally right…The minute we played the opening riff of our one cover in our setlist, “Where Is My Mind?” by The Pixies, crowds erupted.” Hartsel notes that their crowd was especially responsive to their covers in Rhode Island. “News Cafe blew us away with everyone screaming and chanting the lyrics with us. It was a wild night and we definitely picked up some active fans in Rhode Island from that, which was really the greatest hope of all from this venture.” To bands who may be apprehensive about the touring experience and process, Moran said “Do it! It’s a lot less scary than you think. Local tours especially can be pretty cheap and are so rewarding.”

Tysk Tysk Task looks forward to an eventful future with their debut Album set for release on Bandcamp on March 28th. Because of their desire to promote local artists and support women of color in their community, the band has begun a collaboration with the band’s stylist and merchandise director, Cambridge jewelry and fashion designer Jenny Gypsy. On future touring, Hartsel said, “It went so successfully that we are now using this as inspiration and motivation to inform our next tour, which we’d like to make a week long to the south or Midwest.” Their new single “Witchcraft” was released on March 17th and can be found on their Bandcamp. As they move forward, Tysk Tysk Task is proof of the uniting power of local music.  – Birdie Bergeron