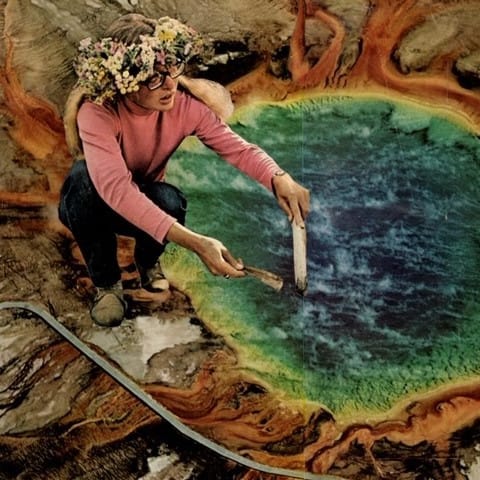 Zachary Boudrot’s “Ringing” feels cinematic. “I can taste the pollen on my tongue,” “I can feel your misty mountain blood,” Boudrot fills the song with such sensory and visual detail that you feel as if you’re standing in the middle of a forest, surrounded by the early morning cold mist as the soft sun peeks through, feeling so small compared to the tall pines that stand like canopies above your head. The vision feels ethereal. The song is ethereal.

“Ringing” begins with only Boudrot and his acoustic guitar as voices ring out around each other creating a sort of chorus effect. Then slowly, we find ourselves introduced to a cascade of instruments. Starting with a singular strum of an electric guitar, we are given synth, bass, and drums. It begins to give the song some soul. However, the star of the show that truly gives this song its ethereal trait is the harmonies ringing behind Boudrot’s main vocal. You can picture standing in that forest, feeling the harmonies radiate from trunk to trunk throughout the entire forest.

However, listeners are in for more as the song goes on. The song reaches its final form. Emerging into a voluptuous track, full of body and life. This is when we become acquainted with the final piece of the puzzle, the electric guitar as it howls from the ether. A cry “from across two states.”

Though, this isn’t the final surprise in the accompaniment. The final surprise comes around 3:35 in the song where Boudrot belts, “speeding up my heart rate.” Here, layered below the track – a mere compliment to the rest of the instruments – you can hear what is seemingly a kickdrum almost mimicking the sound of a beating heart. And you can feel it deep in your own chest. Ba-dum-ba-dum.

This song is a song you want to crawl into. You want to live inside the warmth of its crevices and seek shelter in it. You want to relive it and the sheer beauty of it as many times as you can. Hell, you want to ask it to go steady.

“Ringing,” is a song off of an upcoming record from Boudrot titled, “Disaster.”