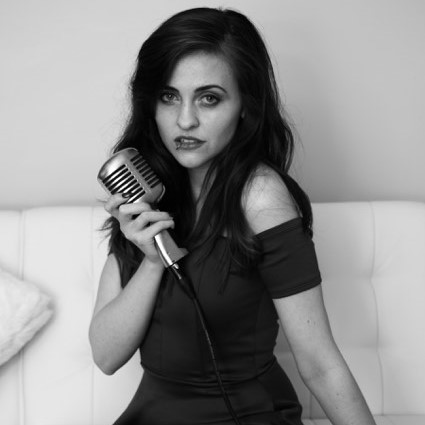 5 Questions For: Kylie Eastman of Don’t Blow It

Billerica-based rockers Don’t Blow It are difficult to categorize. The quintet has been known to dip into areas of power-pop, groove-rock, swing-punk, psychobilly, surf rock, and more with little provocation. Regardless of the sound however, their energy is palpable and a regular spectacle of the Lowell scene. At the front of Don’t Blow It is vocalist Kylie Eastman, whom we caught up with to see if she could shine some light on…

Lately I’ve listened to the same music every day before/after work and I’d have to say Splitsville by Murderland. It’s more of an EP than a full length album looking at the track listing but EVERY song is great. It really wakes me up in the morning and, especially where it’s getting warm lately, it’s great to listen to on my aggressive drives home with the windows down.

As for bands I’d like to share the stage with, I’m choosing to give 2 answers: one possible and one impossible. Those would be The Interrupters because they portray exactly what I want the music industry to be like, especially in the aspect of being more welcoming to female artists and treating it as less of a novelty and the other Audioslave because they’ve definitely been a great influence on my band and I can remember going to parties in the summer with my band mates and being excited over Tyler’s new Audioslave cassette tape and blasting it at 3am on the drive home feeling on top of the world.

Outside of music I’m a horror fanatic. I love haunted houses and scary stories, I read a lot, watch a lot of movies horror and otherwise. Special effects makeup, I’m a decent cook and I enjoy that, caring for animals has always been a big thing for me and I love theater.

Personally I’d love big changes to be made for women in terms of the assumptions. I constantly get asked when checking into shows if I’m the merch girl and people ask me “what band is your boyfriend in?” When they see me at shows. He’s in the band that I’m the lead singer of, that’s the one. We deserve to be treated as much more than support staff or novelties additions to bands and I’m grateful that my band mates understand and respect that.

5. What was the moment that made you realize you wanted to pursue music seriously?
(This question comes from the previous 5 Questions interviewee Cayla Johnson)

I guess I realized that I wanted to play music when I realized that med school was 8 years and a million dollars? No, but in all seriousness I don’t really know. I started playing in bands at the age of 14 and it’s kind of naturally just gotten bigger and provided my with more opportunities since then so I guess when I realized that it made me feel better about my family, financial situation, past relationships, mental and physical health is when I decided and that kind of coincided with when I started singing for Don’t Blow It and I was given the chance to write lyrics about things that really resonated with myself and I hope other people, as well.

Don’t Blow It are currently working on their first full-length release. Their self-titled EP can be streamed from their Bandcamp site. They will be appearing at Thirsty First with The Only Humans on July 13th.