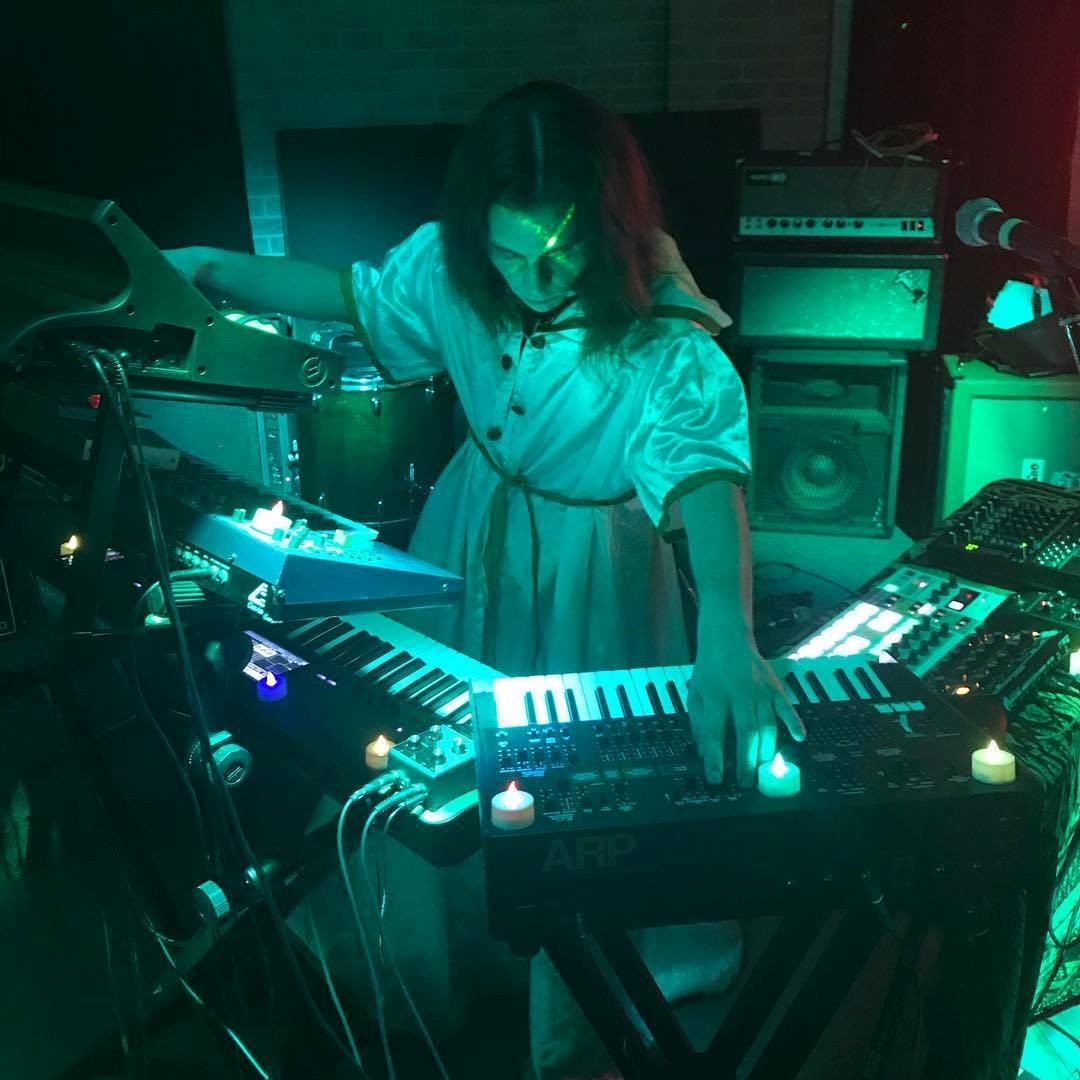 Far to the West of Lowell, heading in the direction of Greenfield lies the town of Orange. A mill town similar to Lowell, it’s home to a rich and vibrant history of industry and agriculture, but more importantly it’s the home of an enigmatic synth wizard named John Trudeau. A clasically trained keyboardist who regularly delves in fantastical soundscapes and analog synthesizer journeys, (Not unlike those of progressive rock legend Rick Wakeman) Trudeau regularly ventures from the forests of Western Massachusetts to bring textured and mystical performances to venues like UnchARTed Gallery. They’ve been known to conjure up some mesmerizing melodies, but can they conjure up answers for…

If we’re talking really great albums that I’ve listened to for the first time, I’d have to say The Garden of Abandon, by Monestary (out of Salem, MA). It’s a Dungeon Synth-style album, but isn’t quite as moody as the genre tends to get. He uses a lot of foresty sounds, and the album is really beautiful from front to back. Great stuff to listen to while planning out D&D encounters. If we’re just talking really great albums, I listened to Monolord’s Empress Rising this morning on full blast while driving, and that is always an experience I highly recommend

This one gave me pause, as a lot of the struggles that I currently face with getting my music “out there” is finding bills that I’d be well-received on. If I had the pick of any band, though, I’d have to say Boris. Stylistically, they run the gamut; but everything they do is so well executed! The majority of their music is quite heavy, and uses repetition and occasional atonality to complement melodic structures. That’s something I try my best to do with my music, so I feel like we would go well together compositionally. Plus, they’re one of my favorite bands- and they seem like lovely people, to boot!

I have a few hobbies outside of the realm of music! I’m in a couple of tabletop role-playing games (one as a player, and one as a game master), and I’ve enjoyed that since high school. I also enjoy gongfu-style tea ceremonies, and loose tea in general. More recently, I’ve gotten into fountain pens. That’s been a bit of a consuming force in my life as of late; the hobby has many facets that I find thoroughly enjoyable to engage in. Just ask my friends, I haven’t shut up about my damn pens and inks! I’ve even taken to encouraging people I know to get into the hobby (“penabling” them, as we in the fountain pen community like to call it).

The concept of a “scene.” At risk of sounding haughty, I feel like it’s impossible to fully grasp the scope of the entirety of an area’s musical community. There are so many different genres and subsets to the area! That’s a marvellous concept to me; but when people start talking about “The Scene” as though they know what everyone is doing everywhere, I just want to roll my eyes. I always try to refer to the “greater musical community,” because it includes all facets/subsets that people may refer to; it also allows for a more digestible discussion of the smaller subsets (the metal community, the experimental music community, etc.)

5. To quoth Meatloaf…I would do anything for love, but I won’t do THAT. What wouldn’t you do for love?
(This question comes from the previous 5 Questions interviewee Dave Perry)

I wouldn’t change myself for love. That’s a mistake that I’ve fallen into far too many times, and I like to think that I know better. At one point, I had almost given up music for a partner who felt insecure about my making friends in the greater musical community (red flags abound, I know- but hindsight is 20/20). In the past few years, I’ve felt less of a pull towards traditional romantic love, anyways. I’ve found that building and nurturing fulfilling friendships has proven far more satisfying.

John Trudeau will be performing at The O’s in Sunderland, MA on May 10th, and at Desperate Annie’s in Saratoga Springs, NY on June 6th. Their latest record, the 40 minute suite Ascent is available to purchase from their BandCamp site.