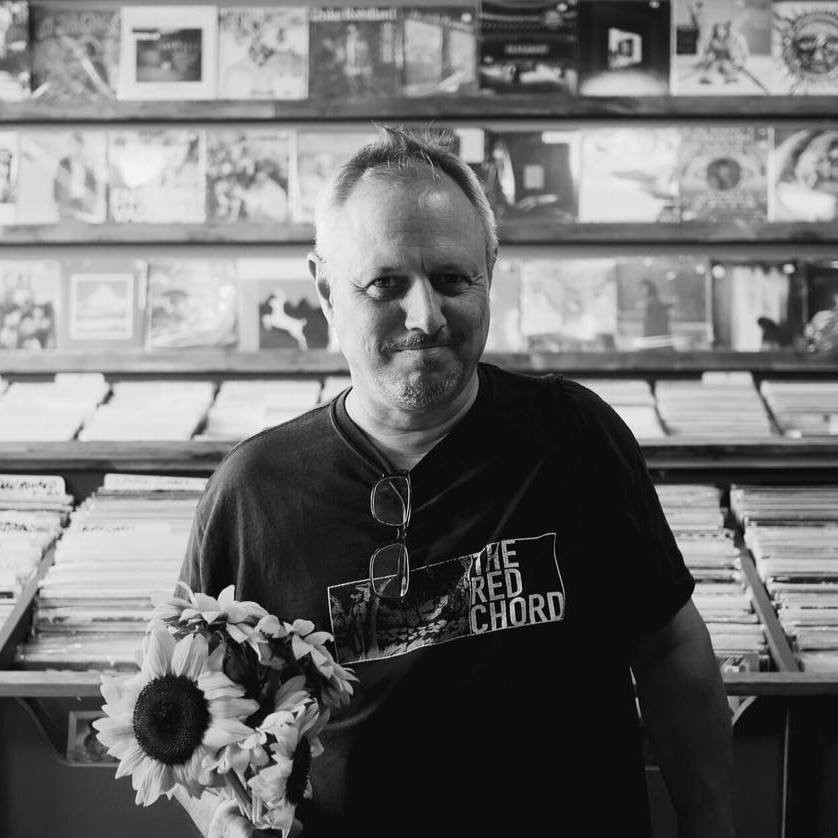 It goes without saying that an arts/music scene as robust and diverse as Lowell’s needs a high-quality record shop to match. Luckily Lowell has Vinyl Destination, an independently-run record shop that strictly caters to vinyl shoppers, carrying a wide-ranging vareity of records, ranging from hardcore punk to cool jazz to a vast array of oddities on wax. It’s the Lowell scene’s go-to place for LPs, helmed by current UMASS Lowell employee Dave Perry, whom we caught up with to ask…

American Love Call by Durand Jones & The Indications. Arrived March 1. Sweet, sweet soul for my sweet spot, which lies in Memphis and Muscle Shoals from around 1970 to 75. This album is a tour through the soul of the ‘70s, from Philly to Miami to Memphis and Detroit. It’s modern, but it percolates with American soul music traditions. It’s almost like musical clues are tucked in to the record. And there’s not a bad song on it. Not one. We always played their first album – recorded for just over $400 — in the store. If I put it on, I sell a copy. It’s almost Pavlovian. If someone came in and said, what’s the best record you have? Or “hit me with something I don’t know!” I’d put it on. And it always sold. It’s just letting people hear it. Save for Rumours, that first album by Durand is easily our biggest seller. And we sold 10 copies of the new one on the first day. Greatness isn’t measured in sales, of course. This album is great by any measure.

I have always wanted two people to play in Vinyl Destination. One of them is Lee Ranaldo, the sonic adventurer and former Sonic Youth guitarist. He sort of embodies the store in that he’s not just one thing, and perhaps a bit unpredictable. I just love his playing. And Tanya Donnelly, who I consider the secret weapon of Boston’s music scene. She is still making music as well as she ever has (I would argue better) and I imagine she is iconic to a lot of young women. And one of the great joys of Vinyl Destination is that so many women come in. For the longest time, records and record collecting were male-dominated pursuits. And it was all about money and collectability and which pressing and what condition. Nerd stuff. Thankfully, that has changed. Women want the music, the trappings be damned. My craftiest shoppers are girls, young and old, who know just what they want.

Wait, there are passions and hobbies outside of music?

I love my family to death. I love spending time with them. I love college basketball. Love hiking. Rock bios. Talking about music. Oh, man…a lot of that is music.

I don’t pretend to know enough to want to change anything. I guess the thing I hate is huge shows. Stadium shows. Summer barn things. The drive, the parking, the traffic, the prices of everything, the bathrooms, the kid down the row puking, the rude concertgoers who prop girlfriends on the shoulders like trophies. I spent decades covering shows and I vowed never to do that when I had a choice. There is nothing better than being in a small room with a great band. I mean, I love what Chris Porter is doing with The Town and The City Festival.

5. If your shop could have been featured in any movie, what movie would it be and why?
(This question comes from the previous 5 Questions interviewee Finola McCarthy)

That Thing You Do. I love Tom Hanks’ film, of course, because it gets everything right about how the music biz was, I love that era of movies that the film apes so well, but it’s the time I loved. It’s when I discovered records – and the physical architecture of record stores. The bins, the flipping, the smell, the thick cardboard. It was all a fetishist’s delight and I fell for every piece of the puzzle. I still do.

Vinyl Destination is located at Mill No. 5 in Lowell, (Alongside musical instrument shop The Tone Loft) and is open Thursdays through Sundays.