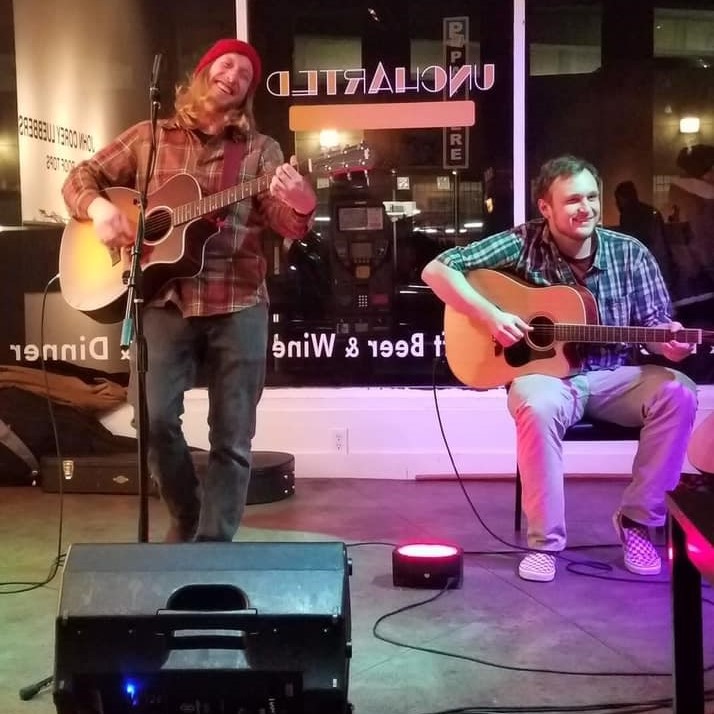 Where Do You Mic? Lowell’s Finest & Where to Find Them

Everyone is making things! It’s so exciting to see friends and total strangers come together to engage over music. We relate with one another through shared experiences; scrolling through Netflix aimlessly with no hope for a decision or we marvel over folks having children! Everything is wild to scramble together nowadays but sometimes we get together and talk about what we’ve shared in open spaces, places we can feel safe in. These open mic spaces are right underneath you and wanna simmer in the saucepan with you. Utilizing your local coffeeshop or makerspace to harvest roots within your community is a glowing idea. Taking to it on your own, with your own creative control underneath it all is what keeps some of these musicians coming back for more.

Kevin Conway, Lowell Spin developer and all around scamp, caught up with me through THE I N T E R N E T and shared thoughts on why they love playing Open Mic Wednesdays (Woody Wednesdays) at UnchARTed.

KC: I like playing UnchARTed for several reasons. I have a great relationship with Mike, Angie, and the staff and it’s one of my go-to places in town. I installed the sound system there (with the help of Coleman Rogers and Tyler Krome) so I feel slightly invested in the place. So not only does it actually have a house PA, but it sounds and looks good too. I like the place. It’s fun, unique, and a very Lowell place. It is a corner stone of the Lowell Music scene. In terms of support…I never really ask much of anyone, overall. I prefer to handle as much as I can on my own and I think Mike knows that.

KC: I would say I play UnchARTed once a month on average, between the different bands and open mics. Other places in Lowell that we (or I – or both) have played include Warp & Weft, Coffee and Cotton, Gallery Z, Thirsty First, Brew’d Awakening, The Worthen House Cafe, and The Hearing Room. We’ve also played upstairs at the Old Court, Zorba Music Hall, Navigation Brewing, and in-store at Vinyl Destination.

AV: Do you prefer doing solo open mics or full band experiences at booked shows? What’s the hugest difference for you?

KC: That’s tough to say. I love playing with a band but playing solo is so rewarding. It’s just you and an acoustic guitar and you just go for it.

AV: Do you ever try to anticipate an audience before you play? Does it ever come into play when thinking of a set list, being that most open mics have a 3 song cap?

KC: I try not to anticipate anything. Just go and see what happens really. I’ll play the same 3 songs I was planning to play regardless of how many people were there. I typically like to play all the songs that we don’t play at shows, or the ones that I haven’t introduced to the guys yet, or just the ones that are most personal to me. But typically I like to play the ones that don’t normally get heard.

AV: What do you get out of playing open mics in the Lowell area? Do you have an end goal (i.e. a reaction, a positive exchange that leads to a bigger networking opportunity, etc.)

KC: Open mics are always a cool, unique experience. You never know what you’re gonna see or get. It’s cool to see people who don’t typically play out because maybe they don’t have band, or enough songs, or the confidence, or whatever the reason may be. If it weren’t for the open mic, maybe they would never have a chance to play in front of people. At one of the open mics I hosted at the Hearing Room we had a gentlemen from Western MA show up and gave a bit of a lesson on the *oud and Middle Eastern music. That was pretty neat. You’re not going to see anything like that at an actual show. It’s also a great way to try out new songs or try and remember some old ones. Typically, it’s a no-pressure, relaxed environment with like-minded people so it’s encouraging. It’s very supportive and a good way to build confidence. It’s a great way to meet new people and network. Sometimes when people are traveling, they will seek out open mics in the area they are visiting, as they wouldn’t be able to book a show there. I know this because I’ve do it myself. And I’ve met people in various places and also from various places this way. It’s very cool.

Whether it’s Whiskey Duo or SwimminTrunks, these are just a few of Conway’s projects. With more ground to cover along the way, take a minute and click a few links below.

Another artist enjoying playing out in Lowell is Cayla Johnson. They’ve been booking and promoting shows at the Worthen House Cafe, aka The Worthen Attic  since this past November. Every Wednesday night around 8:30, the Worthen opens their doors to anyone willing to showcase whatever they got! Affectionately called Cayla’s Caberet, they have been leading up to an event on the 26th geared toward expressing the kind of creative freedom that only a place like the Worthen would allow. Johnson, a vocal teacher working in the Chelmsford district, has made her time with Worthen that much more value by partnering with her sound guy Joe Marais. They’ve worked together on multiple songs, verging on over eighty works together, and are showing no signs of slowing down.

Johnson expressed much gratitude toward the Worthen for giving them the chance to book openly and have “true creative freedom” across the board. Starting in February, Cayla will will be booking shows upstairs (The Attic) twice a month in addition to her weekly open mics giving that much more opportunity to those in the area ready to play out. Johnson also mentioned the reception from the community toward beat poets taking to the mic. Anyone can “play” an open mic, it’s just a matter of how bad you want to and what you’re gonna do with it.

“I’m so fortunate for the Worthen opening it’s doors to me, along with the city and all it’s comforts.”

Check out the open mic at the Worthen on Wednesday nights around 8:30! Everyone is welcome and can participate in whatever capacity they choose. Don’t forget to come out to Cayla’s Caberet, sponsored by Music Industry Boston on January 26th at 8:30! Tickets are 10 in advance, 12 at the door. It’s a classic caberet review style with a bit of a twist! It’s a curated, auditory experience unlike anything Lowell has yet to see!

Don’t fret if Wednesday is a pickle for you. There are many other spots in the Lowell area to try your stuff out and see if it sticks:

Getting the chance to speak with Ben Farley was unique and full of surprises. Farley has consistent ties to the folks at Warp & Weft that led to this pleasant transference of electrons over T H E W E B. He did preface his lack of sleep in this interview. His candor was much appreciated.

AV:  Why do you enjoy playing at Warp & Weft?

BF: As Conquistador-President, Dishwasher Emeritus, and Overlord of the Underworld at the Warp & Weft & Whiffenpoof Ristorante and Cocktail Refinery, 97 Market Street Downtown Lowell, Massachusetts USA, Established 1916, I, Benjamin Lee Farley, AKA Ben Ben Ben, née Benjamiah Bunkum, the erstwhile Ninja Ben, who begat Benbo Benskie, who became Packrat, or Benjelly, or the other way around, hereby declareth the W&W Open Mic to be a consistently GOOD TIME. W&W is a rare beast for an open mic in the sense that each night is unexpected.They are probably all great, but what the W&W Open Mic has is a bunch of killer musicians running the show, and possibly playing along with you, if you hit them up ahead of time.

AV: Who have you met through playing at Warp & Weft?

BF: Yea verily, these most killerest of musicians are named Stephen Clements, Dave Powers, and Paul Ortolano, and they spit hot fire. Please do contact them to hear stories about their Open Mic Nights, formerly at the Back Page and elsewhere, and now every Thursday at our W&W… They probably also have some crazy stories from when they toured with Meatloaf? I’m not sure if this is true.

AV: What’s something valuable you’ve gotten out of playing at Warp & Weft?

BF: The W&W open mic has allowed me to re-learn to be on-stage; to throw together songs and friends and see what happens; and to expand and control my powers of yelling-into-a-microphone beyond my WILDEST SWEET WET PIPE DREAMS!!!!!!!!! IT COULD DO THE SAME FOR YOU!!!!!!!!

AV: Who would you thank for this opportunity at Warp & Weft?

BF: The Faulkner Family. They are all so brilliantly talented and very nice people. If a Faulkner is ever fucked with, I, as the Overquistador, shall lay waste to the infinite heavens and fathomless hells of all nations and religions of terrestrial and extraterrestrial origin, and I’ll do it without leaving my freshly-tidied oval office. That last guy left a stink in here…

See Ben and all of his shenanigans at Warp & Weft on Thursday nights at 9PM! Trust me, it sounds like something you don’t want to miss. Especially with the way Farley talks about his crew of scroundels, it just seems like a damn good time that literally no one should actively miss out on.

Every open mic is different. Each one will always be. But they are there for all of us to be part of. Lowell is a playground for all of us to swing around on, bash our nails against , and break strings to. Taking time to honor our community is something invaluable to us as humans. It’s how we reflect on our experience through a communal gathering. Whether you’re interested in playing an open mic or just going to enjoy the culture, it’s necessary to any’s personal growth. So make something! Whether it’s a song, a sweet set of words you wanna share, or even just an appearance – just be part of something you can influence.