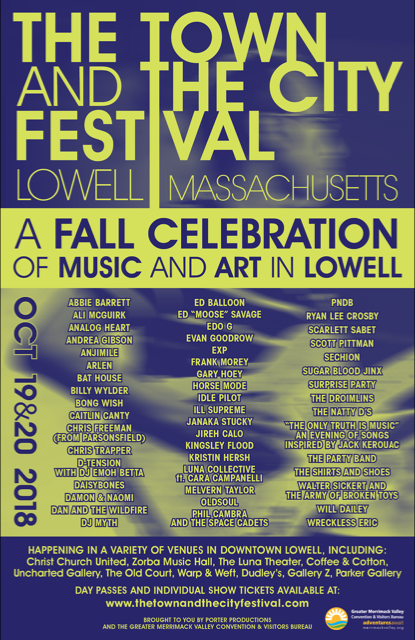 Who’s Coming To Visit? – The Town & The City Festival

October 19th & 20th will see the arrival of the first ever Town & The City Festival in Lowell, during which over 50 local Massachusetts acts will descend upon the Mill City to perform at 10 different venues spread across the area. Lowell is no slouch when it comes to local music greatness, with a slew of city favorites like oldsoul, The Party Band, Daisybones, and many more providing a backdrop of local flavor. Among the staples of the Lowell scene however, are a handful of acts from all across New England making their way to the city, from areas like Boston, Northampton, New Hampshire, New York, and more.

For many Lowell residents this will be their first time experiencing these acts, so we at The Lowell Spin would like to take a moment to highlight just a handful of the many great bands and artists from outside the city, coming to perform at The Town & City Festival in October.

A native of Roxbury, and a veteran of Boston’s hip-hop scene, Edo G (Born Edward Anderson) has brought golden-age hip-hop sounds internationally for over 30 years, touring and performing with other veterans of the genre such as RZA of Wu-Tang Clan, KRS-One of Boogie Down Productions, Masta Ace, and numerous others. For The Town & The City Festival he will be performing on D-Tension‘s hip-hop showcase at The Old Court, alongside Lowell favorites like Ill Supreme and Sechion.

Mariam Saleh performs indie folk with a distinctly psychedelic bent under the moniker of Bong Wish. The Boston native brings a lush, orchestrated, and sublimely euphoric sound which brings to mind a combination of Grace Slick, The Incredible String Band, and even Ween.

A mainstay of Boston with roots in Texas, ancestry in Malawi, and LGBTQ+ sensibilities, Anjimile produces a soothing, hybrid mixture of indie folk, electro-pop, and general ambience, all bolstered by their haunting vocal delivery, which is equal parts sparse, exuberant, and brilliant, and harkens to a combination between Lauryn Hill and Q Lazzarus. Anjimile will be performing at Coffee & Cotton, along with Bong Wish, and Evan Goodrow.

A former England native, now arriving from New York, Eric Goulden’s quirky and unhinged blend of punk-inflected power pop has delighted crowds the world over since the mid-70s. Perhaps best known for his famed Stiff Records track “Whole Wide World”, which Mojo Magazine named one of the best punk rock singles of all time, and has been covered endlessly by acts ranging from The Monkees to Cage The Elephant to Paul Westerberg. Wreckless Eric will be performing with Scott Pittman at Gallery Z.

The Washington Post has referred to Kingsley Flood as having as “Billy Bragg-like folk-punk sound.” There couldn’t be a more accurate comparison to describe the Boston/Washington-based quintet, who bring a roots-folk flavor blended with a bounding, punk energy, grounded with infectious rhythms and melodies. Kingsley Flood will perform at Warp & Weft with Abbie Barrett.

One of the most remarkable live acts to come out of Boston, it’s remarkably difficult to define a band like Walter Sickert & The Army of Broken Toys. The band label themselves as “steamcrunk”, but incorporate elements of dark folk, cabaret, rust belt blues, chamber pop, gothic romanticism, apocalyptic imagery, and of course steampunk into their chaotic songs, centered around the macabre, Screamin’ Jay Hawkins-like theatrics of singer/songwriter Walter Sickert. The band will be performing with Lowell-based Celtic-punks The Droimlins, as well as Lowell Spin favorites Surprise Party, daisybones, and Phil Cambra & The Space Cadets at The Old Court.

This Boston quintet describes their blend of neon-flecked ambience, progressive cleverness, and indie rock furor as “Neo-Punkadelica”.  Whatever label you choose to apply, it’s hard not get sucked into Bat House‘s celebratory freakouts and pure, unadulterated psychedelia. Bat House will be performing as part of The Lowell Spin‘s local showcase at UnchARTed Gallery, along with local favorites Idle Pilot, Horse Mode, and oldsoul.

More information for The Town & The City Festival as well as tickets for the full event and all of its individual shows are still available at their website: www.thetownandthecityfestival.com